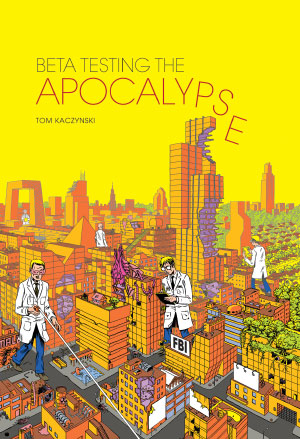 A new review of Beta Testing the Apocalypse, this time by The Comics Journal! As a reader of The Comics Journal since issue 148 (Charles Burns Interview. I miss the paper issues!), I’m pleased as punch. Here’s an excerpt:

[…] One of the pleasures of reading Beta Testing, as in other watershed collections like Caricature,Curses, or Everything Together, lies in watching a cartoonist become less mindful of his precursors, less rote in his treatment of subject matter, both freer and more assured. As the book progresses, Kaczynski sloughs off influence, just as his characters slip away from civilization. A breakthrough story like 2008’s “Million Year Boom” nearly brings the book to a halt halfway through with its impressive and authentic weirdness, yet still retains the stamp of millenarian systems novelists, still partakes of the old dead-eyed Clowesian aloofness. By the time we reach the concluding story, “The New”—at once an ode to modernist architecture and an allegory literalizing the decline of the west, created uniquely for this volume—Kaczynski’s layouts have exploded into space, cities and buildings splayed out on the page in startling and diagrammatic splashes.

Also, the review delves into the index, which is personally very satisfying. I’m always curious how people will react to it:

To his credit, Kaczynski acknowledges as much, duly footnoting his book’s debt to J.G. Ballard’s drowned worlds and concrete islands in an index that records other oblique references to Jane Jacobs and Slavoj Žižek—though entries for “Gibson, William,” or “DeLillo, Don” remain curiously absent. Kaczynski’s looming dread and sub/urban automata owe at least as much to White Noise as his vision of mechanized, entropic modernity does to The Atrocity Exhibition, not to mention his pontifications on gleaming consumerism: “Consider the modern bathroom. … How did this antiseptic room where excrement magically disappears come to be?” In such revelations of the science-fictional in the everyday—Kaczynski also invokes grain silos and utilitarian office buildings as totems of some alien race—the cartoonist conducts a kind of archaeology of the future from among our commonplace existence, in much the same way the Godard of Alphaville or the Tarkovsky of Stalkercalled forth the otherworldly moonscapes that have always been dormant in what our culture has erected or let fall into ruin.

William Gibson should’ve been there, but Don DeLillo I’ve never read. Here’s hoping there’s a second edition so I can tinker with the index some more!

The rest of the review is here. 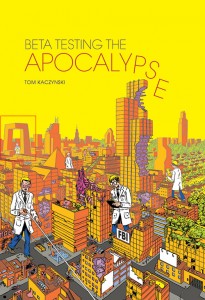 I was interviewed over at The Comics Journal. We talked a lot about a variety of topics: Beta Testing the Apocalypse, Trans Terra, what’s new at Uncivilized Books, Marxism, crime fiction, the art of indexing and more! Here’s a taste:

Now, your upcoming Trans Terrabook is basically a collection of the four minicomics?

It’s the four original Trans mini-comics, plus a bunch of new material that wraps up that whole train of thought… or train wreck of thought or something. [Laughter.]

Those books seem to be part of a tradition in comics you don’t see that often any more—the kind of free-flowing rant or essay comics with the cartoonist walking around and acting as the narrator, like Clowes used to do, and Crumb and Peter Bagge. Were you consciously engaging with that tradition?

All those guys are big influences on me. I wasn’t consciously trying to do that, but when I’m looking back, I’m like, “Oh, yeah, well, duh, they were doing similar things.”[Hodler laughs.] I maybe get a little bit more overtly intellectual on mine —where I quote actual books and people — whereas they were a little bit more casual with their pontificating or whatever. [Laughter.] What I was doing originally with the Trans books… basically the first book was a kind of panicked, “I need to do something for the first MoCCA festival!” And I just kind of regurgitated all this stuff I was thinking about at that time very quickly. I got a pretty good response to it, and I was like, “Well, I might as well follow up, ‘cause I didn’t really finish my train of thought on the first one,” and I just kept going with that. Each book is more and more carefully thought out. I’ve been searching very slowly… hopefully when this book is out, I will have found something resembling a coherent thesis. [Laughter.]

The first three you did pretty close together?

Yeah, the first three were pretty close. I think they all came out within a year, year and a half. In the middle of that I got the opportunity to contribute to Mome, so that derailed the production on the Transbooks for a long time. I always thought of these Trans books as a little bit more casual, little bit more off-the-cuff, but the more I got into it, the more fascinated I got with using comics to explicate ideas. The more Mome stuff I was doing, the more I wanted to go back to the Trans comics and do more of that kind of work.

Did you ever consider doing that kind of thing for Mome?

I didn’t think it would fit. I thought about it, but I got in this very specific groove for Mome, that was a little bit Ballardian, a little bit science-fiction, and I just wanted to keep that going. If Mome had continued past issue 22, I may have done more of that kind of work in the future, but yeah, in Mome I wanted to keep a certain… a different level of work… a different kind of me. [Laughs.]

A Polish author you briefly mention in one of the minis, Witold Gombrowicz, wrote a novel—which I haven’t read—called Trans-Atlantyk, and I was wondering: Does that have anything to do with the titles of those minis?

No and yes. [Laughter.] I had read pretty much everything that Gombrowicz had written way before I didTrans Alaska. I read Trans-Atlantyk but it’s something that I had forgotten, and it wasn’t a conscious influence at first. When I did the Trans Alaska book, the title actually came last. I didn’t know what it was gonna be, so I was like “part of it is set in Alaska, so I’m just gonna call it Trans Alaska.” I decided to keep the “Trans” for the other books. I was writing about Atlantis in the third book, and I remembered that Gombrowicz did Trans-Atlantyk. I ended up calling the third book Trans-Atlantis. It wasn’t a specific reference, but more of a happy coincidence. But Gombrowicz definitely influenced me quite a bit, he’s one of my favorite authors. Just in terms of how he writes and more importantly his diaries. He was an émigré author, he left Poland at the beginning of World War II, and ended up living in Argentina for many years. If you read his diaries, it’s all about being a Polish person in the New World and his struggles with that. That was really important for me when I was younger. I identified with that kind of struggle.

I’ve meant to read him for a long time.

Ferdydurke, his first novel, is amazing I think.

Check out the rest here.