I’ve been quiet about my new book, Beta Testing the Apocalypse (Fantagraphics), mainly because, until very recently, I was still working on finishing all the art & design for it. Fantagraphics has already announced on their site, where it is also available for pre-order (hint, hint). I’m very excited to officially announce it here. What’s in the book you ask?

Over the last few months, I’ve been wanting to post some art and progress reports on the book. In the end there was little time for that. In a way this felt like I had a chance to one more last MOME story, and it’s also the last time I was MOMEd. Over the next couple of months, in anticipation of the release, I’m going to share a bunch of drawings, ideas and other goodies about the book. Stay tuned!

The term ‘Momed’ was coined by Gabrielle Bell (if I remember correctly) and it refers to MOME contributing cartoonists who, in an effort to meet their deadlines, forgo normal social behavior and lock themselves up for extended periods of time in a desperate attempt to make comics at a highly depressing rate of speed… In short, I’ve been Momed over the last few weeks, which is why this blog has been very quiet lately. But my next MOME contribution is done and so this blog can resume it’s semi regular posting schedule.

Speaking of MOME, the current issue (MOME Vol. 10, Winder/Spring 2008) is out now. This time I contributed a four page story called Phase Transition. It’s a kind of a prequel for the story I just finished. It wasn’t intended that way originally. As I worked on the MOME Vol. 11 story it slowly became clear that the main character from Phase Transition should play a role in it.

In addition to the story, I’m also the subject of an interview conducted by Gary Groth. I was very nervous before this interview because I’ve read so many of his interviews over the years and he’s definitely one of my favorite interviewers. It turned OK in the end and the conversation was pretty interesting even if I didn’t always give a good or coherent answer. Apparently Fantagraphics will be putting up all the MOME interviews online at some point, so look for it to appear there soon. I’m sure I’ll link it here when it goes up. 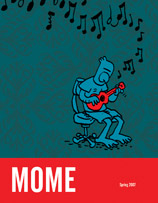 My blogging frequency was never great, but it has slowed to a glacial crawl in recent months. One of the reasons for the slow-down is MOME, the quarterly comics anthology published by Fantagraphics. I’ve been asked to become a regular contributor so now I spend most of my free time working (or thinking about working) on comics for the publication. The quarterly deadline has been a difficult adjustment. Time for all sorts of other activities (like this blog) has pretty much evaporated. I’ve heard some say that I’ve been MOMEd… But I’m not writing this to complain. I’m honored to be included in such good company!

The MOME 7 (Spring 2007) story is actually a reprint of a story that first saw the light of day in The Backwards City Review #4 a few months back. This was done to give me a little bit extra time to develop new stories for the subsequent issues. All future MOME stories are going to be new, and created specifically for MOME. One thing MOME has allowed me to do is use color. I ended up converting the graytones (roll over the image above to see comparison) to a second color.

Anyway, the book should be in stores now. You can also pre-order it on Amazon, or get it now from the source itself: Fantagraphics.