If you’re wondering, other posts on Comics Education are here: one, two, three, four, five.

Today I want to talk about comics in areas of study other than Art and specialized comics programs. English, Cultural Studies, and other programs have since the 90’s started to integrate the study of comics into the curriculum. When Art Spiegelman’s Maus was awarded the Pulitzer 1992 most rationales to ignore comics in the academy melted away. A year later Scott McCloud built on Eisner’s Comics and Sequential Art and released Understanding Comics. Whether you agree with McCloud’s thesis or not, the book quickly became a staple text for the academic world. It created a common language for talking and writing about comics. It was the perfect comics 101 text.

In my college experience (mid 90’s) I’ve taken many courses in the English and Cultural Studies departments. In both cases comics as object of study, or comics formatted assignments were welcomed with curiosity and open minds. My professors mostly didn’t have the critical apparatus to evaluate these projects, but at minimum they were interested in the medium. Almost all of them were at least somewhat familiar with Marshall McLuhan’s work. McLuhan famously included comic-books as an example of a ‘cool’ medium (meaning a low-definition medium requiring more conscious reader participation) in his pioneering book on media theory Understanding Media (1964).

Scott McCloud built on McLuhan’s media centric view, and introduced his own hot-to-cool continuum that was comics specific. 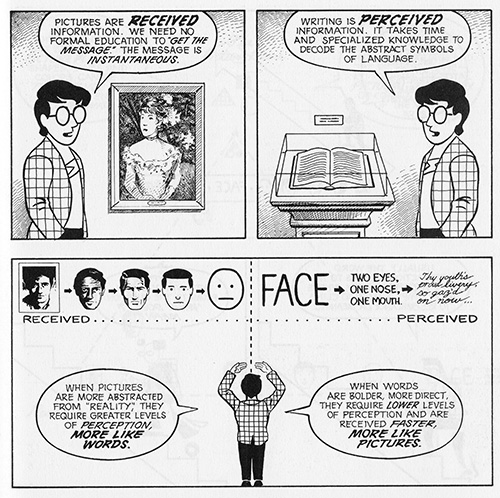 Of course, McCloud’s title Understanding Comics is a direct reference to McLuhan’s book. It’s an association that I’m sure helped open doors to the academy and cemented the book’s place as an essential text on comics.

This was my limited experience. I’m sure in other places comics weren’t as easily welcomed. Still, this reception was in stark contrast to way comics were received at the Art Dept.

Another potential reason for this relatively generous reception from literary academia resulted from the ‘comics as literature’ model that was dominant from the late 80’s to the present. The work of prominent cartoonists that emerged from that era: The Hernandez Brothers, Daniel Clowes, Adrian Tomine, Chris Ware, Seth, Chester Brown, Charles Burns and many others fits the literary approach (though, of course, not always and not entirely). This work was championed by The Comics Journal and it was this quality that was recognized by the Pulitzer Prize when it was awarded to Spiegelman’s Maus. While all of these creators are no slouches in the art department, they all create works that are story driven and deal with many traditional literary concerns.

I want to briefly focus on Adrian Tomine. Adrian earned a degree in English from the University of California in the 90’s. (I wonder if Clowes’ Art School Confidential was in any way part of his decision to not go the art school route?) I can’t locate my TCJ interview with Adrian, but if I remember correctly, at that time he was concerned with learning solid storytelling. He felt he could learn more from say, Raymond Carver, than the average comic-book on the stands. Comics to him were a storytelling medium. Art, though clearly important, was subordinate to storytelling. That attitude is understandable. At the time Adrian attended school, well written comics were a minority (and still are). I’d be curious to know if Adrian he ever brought comics into the classroom and created comics as assignments.

This ‘literary’ component of comics is something that is often overlooked in comics education. The vast majority of comic-books are still stories that people read. But most schools (that I’m aware of) that taught comics focused on the art side of the equation. Students were taught the grammar of comics, clarity of layout, transitions, or simply how to draw or use the correct tools. But the quality of storytelling that was told using these techniques was often an afterthought. Courses on comics as object of study (as literature) have also been proliferating, but courses on comics writing are still relatively rare. This has begun to change since the turn of the century and it’s something I’ll go over in my next couple of posts.