I recently started researching the historical Twin City Street Car system for a future project. Having moved back to the Twin Cities from New York fairly recently, it’s hard to prevent tears from flowing, when you see the following article from the July 1954 issue of the Mass Transportation Magazine posted in a short by informative article at Eyeteeth:

Click to enlarge
Needless to say, the local public transportation system hasn’t really recovered since the death of the Street Car. Still there are glimmers of hope. The Hiawatha light-rail line is a great start, and I hope they hurry up and build the Minneapolis-St. Paul link already! Then there is the tantalizing 2007 Street Car Feasibility Report. It took some 70 years for the Twin Cities to build a world class Street Car system. It took less than 3 years to dismantle it. How many years (if ever) before we can have a system as extensive as this again: 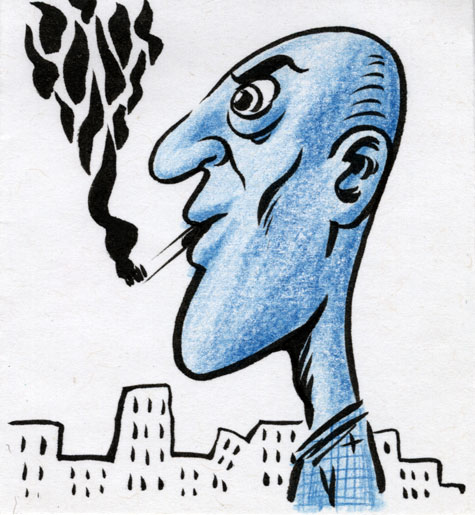 Ink & colored pencil, 2 x 2 inches
This drawing has been staring at me for a couple of months. Somehow it ends up in front of me no matter where I’m sitting and what I’m doing. Clearly, I don’t have the right place for it. So, if someone out there wants to give it a new home, please leave a comment. First come, first serve.

I was moving some stuff around the apartment when I stumbled on this little 3 panel strip in the margins of an old sketchbook. I must have drawn this in the late 90’s or maybe early 00’s. I’ve been also re-reading some biographical material on the Polish writer Bruno Schulz. I’m a big admirer of Schulz’s fiction and art. The strip instantly reminded me of Schulz’s drawings of submissive males, prostrating themselves under the feet of princesses, amazons and dominatrixes. I don’t remember anymore if the strip was conscious or unconscious imitation of his themes, but in my mind it’s still instantly recognizable as a Schulz homage… in a sketchy-90’s-emo-mini-comics kind of way. 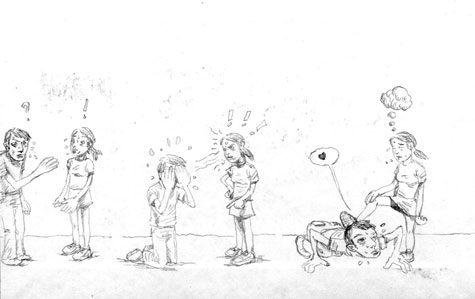 Click to enlarge.
Here is a couple of Bruno Schulz drawings: 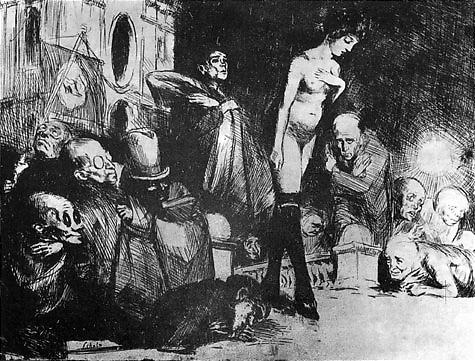 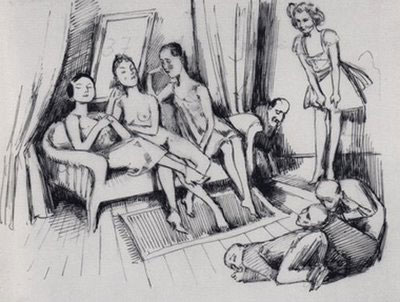 It’s amazing how quickly things can change. In In Defense of Lost Causes Slavoj Zizek wrote that the success of capitalism was marked by the disappearance of the word ‘capitalism’ from public discourse. Capitalism has become the status quo to such an extent that we no longer recognize it as an economic idea (something made-up, invented, artificial), we see it only as ‘the way things are’ (the reality, natural state of things). Needless to say, the book was published before the crisis of Capitalism we’re currently enjoying. Capitalism is being questioned publicly once again, and with good reason. Still, one has to do a double take when the word appears so frequently on the lips of the British Conservative politician David Cameron. Here’s a couple of choice quotes from his speech at Davos:

“A lot of people are angry with capitalism. Instead of representing hope for a better future, they think capitalism threatens it. This matters because in the future, social, economic and environmental progress will only come from the drive, energy and enterprise of individuals. So if we want capitalism to be a success again, we need to make capitalism popular again.”

“Today, the poorest half of the world’s population own less than one per cent of the world’s wealth. We’ve got a lot of capital but not many capitalists, and people rightly think that isn’t fair.”

That’s quite a statement from the leader of the party of Margaret (“There’s no such thing as society.” – as Bruce Sterling deftly observes.) Thatcher! Red Tory indeed!
For all his bluster Cameron still clings to tired old Capitalist dogmas:

“Yes, as I’ve said many times, we must stand up for business, because it’s businesses, not governments or politicians, that create jobs, wealth and opportunity, it’s businesses that drive innovation, and choice, and help families achieve a higher standard of living for a lower cost.”

Somehow ‘The Government’ never amounts to anything. It’s as if property laws & regulations, monetary systems, public education and transportation, trade treaties, research subsidies, etc. had nothing to do with the ‘success’ of business. Just as Capitalism disappears into ‘just the way things are’ so does the government. We forget that a lot of the great things Cameron attributes to business (wealth, opportunity, innovation, higher standards of living, etc.) had to be forcibly wrested away in a bloody struggle by several generations of workers and enforced by generations of politicians and lawmakers… yes… the government.

Ultimately, he’s simply a moralist. According to him, the system is fine, we just got too greedy. We just have to shape up:

“Markets without morality. Globalisation without competition. And wealth without fairness. It all adds up to capitalism without a conscience and we’ve got to put it right.”

This call for a new moral Capitalism isn’t as new as it seems. It’s been slowly bubbling up to the surface of politics for years. In fact Zizek already identified its ‘chocolate laxative’ center while discussing another global economic summit in… Davos… in 2001!

This sentiment is echoed in some recent statements from Obama:

“And when I saw an article today indicating that Wall Street bankers had given themselves $20 billion worth of bonuses ‚Äî the same amount of bonuses as they gave themselves in 2004 – at a time when most of these institutions were teetering on collapse and they are asking for taxpayers to help sustain them, and when taxpayers find themselves in the difficult position that if they don’t provide help that the entire system could come down on top of our heads – that is the height of irresponsibility. It is shameful.”

There is an expectation of morally right behavior without creating any incentives that encourages that behavior. But, outside the tough rhetoric, there is little evidence that anything of consequence will happen. Instead the strategy seems to be this: wealthy capitalists need to hit the pause button on excess and selfishness until things are ‘fixed’… then we can return to regularly scheduled programming. At least Cameron, by using the word ‘Capitalism,’ is willing to acknowledge that this is an ideological battle. No such acknowledgment is forthcoming from the ‘post-partisan’ and ‘bipartisan’ Obama administration. This evasion of politics makes it harder to question major economic assumptions and blind-spots that we keep carrying on our backs like the proverbial monkey. Obama is even going to appoint a Republican as a Commerce Secretary. How post-partisan! It only reveals that Democrats and Republicans don’t differ all that much on the basic substance of economic policy. Jacques Monin, the French journalist, has it right [ again via Beyond the Beyond ]:

“You no longer imagine, it seems to me, that there might actually be such a thing as a “choice of society”. Along with New Labour, the very idea of anything resembling an ideology vanished. In France, on the other hand, politics still condition the life of the individual. Rightly or wrongly, my fellow countrymen still want to believe that a choice of society really remains possible. They might resist reform, as you like to point out, but they involve themselves – deeply – in politics.

Substitute ‘Americans’ for ‘British’ and that statement still rings true. Of course it doesn’t help when the Global Left is a chaotic mess.

This week’s installment of Doodle Dump™ is a continuation from last week. The sketches come from the same sketchbook. Enjoy. Click to enlarge. 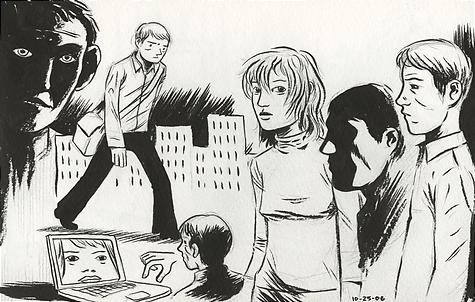