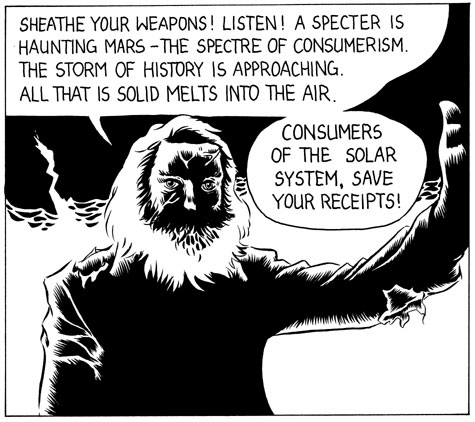 My post on capitalism sparked a few comments from my friend Francis, and eventually a fuller response on his blog. If you’re interested, take a look there first, then come back here for my (hopefully not too rambling) response below.
The first thing that struck me about Francis’ post was how much it resembled… The Communist Manifesto(!), especially the first part. Here’s Francis:

“[ … ] my tenuous theory might go something like this: In the U.S., we’re slowly taking every other sort of prejudice and replacing it with one based on money. For example, I remember reading (in The Nation, I think), that the Sears Roebuck catalog gave a generation of black working class families the ability to buy household goods that they couldn’t buy in the local department store.”

This is precisely what Karl Marx likes about capitalism! The first half of the Communist Manifesto is essentially Marx’s love letter to the Bourgeois and the destructive/creative dynamics of capitalism. The Manifesto isn’t very long and is worth a read. Here are just a couple of quotes related to the conversation:

“The bourgeoisie, wherever it has got the upper hand, has put an end to all feudal, patriarchal, idyllic relations. It has pitilessly torn asunder the motley feudal ties that bound man to his ‘natural superiors’, and has left remaining no other nexus between man and man than naked self-interest, than callous ‘cash payment’. It has drowned the most heavenly ecstasies of religious fervour, of chivalrous enthusiasm, of philistine sentimentalism, in the icy water of egotistical calculation. It has resolved personal worth into exchange value, and in place of the numberless indefeasible chartered freedoms, has set up that single, unconscionable freedom, Free Trade. In one word, for exploitation, veiled by religious and political illusions, it has substituted naked, shameless, direct, brutal exploitation.”

“The bourgeoisie cannot exist without constantly revolutionising the instruments of production, and thereby the relations of production, and with them the whole relations of society. Conservation of the old modes of production in unaltered form, was, on the contrary, the first condition of existence for all earlier industrial classes. Constant revolutionising of production, uninterrupted disturbance of all social conditions, everlasting uncertainty and agitation distinguish the bourgeois epoch from all earlier ones. All fixed, fast-frozen relations, with their train of ancient and venerable prejudices and opinions, are swept away, all new-formed ones become antiquated before they can ossify. All that is solid melts into air, all that is holy is profaned, and man is at last compelled to face with sober senses his real conditions of life, and his relations with his kind.”

Marx is pretty impressed by capitalist dynamics! Of course, Marx saw capitalism as a transitional phase that would culminate in communism. Communism has been interpreted by many different people to mean a lot of different things. Anything from Stalinist dictatorship to Bakunin’s anarchist collectivism. But, they’re all linked by Marx’s awe of the capitalist sublime, and it’s potential to release – through it’s contradictions – the enormous creative energies of the masses.

But, the Capitalist destruction of all old hierarchies and prejudices doesn’t solve them. It merely exchanges them, as Francis himself says, for ones based on money. Racism may become less acceptable socially, but not so economically. Many minority groups (and women) still earn a fraction of white male salaries. A comment to Francis’ post added that capitalism has been compatible with racism in the past. Slavery is only the most obvious example. Take a look at contemporary Dubai. It’s frequently cited as a model of capitalist development, and yet it employs a huge emigrant underclass not allowed to integrate into the indigenous culture. This doesn’t even get at the vast global pro(to)letariat (mostly non-white) that lives in cities of slums.

In addition to the socialist institutions I mention above, capitalism also absorbed concepts like ‘democracy’ and ‘markets’. These concepts all blur together now. We can’t conceive of a democracy without capitalism (Chile). Markets have existed before capitalism and will exist after capitalism. Capitalism has been naturalized to the point of becoming the language of economics itself! This conceptual over-stuffing resulted in the disappearance of the very word ‘capitalism’ (over the last 30 years). This is the point I was trying to make in my original post. I think this naturalization of capitalism makes it more difficult to introduce new ideas (or even interesting old ideas) that have never been tried. The reappearance of the word in the midst of the current economic meltdown, is a reminder that capitalism IS a system, a concept, an idea, a choice; it’s debatable!

Is it possible to have a market based economy without private property? Is it possible to democritize private capital? I don’t know. Is it possible to have democracy under capitalism? Headlines like these: “Lobbyists Line Up to Torpedo [Obama’s] Speech Proposals” make me think that maybe the answer is no. This kind of thing always amuses me. Capitalists are asking for a bailout with one hand, and with the other they scuttle the proposals of a DEMOCRATICALLY elected figure. How is there always enough money to overturn the collective will of the people, but never any for better wages, benefits, etc.? They can’t have it both ways!
Now, I’m not convinced that communism is the way to go. I grew up in ‘communist’ Poland, and it’s not something I’d like to repeat (though I do have nostalgic fondness for that period – more on nostalgia soon). But the Marxist critique of capitalism is valid (though maybe it’s too successful) and should not be discarded, especially not during this crisis. So how do you turn a critique into an alternative? I don’t know, but that’s why I’m interested in utopian ideas. They contain kernels of something else, an alternative… Zizek said that the death of communism may have been the best thing to happen to communism. As long as capitalism exists it will be forever haunted by the specter of communism. It’s undead revenants will keep rising up to haunt the (privatized) houses of capitalism. 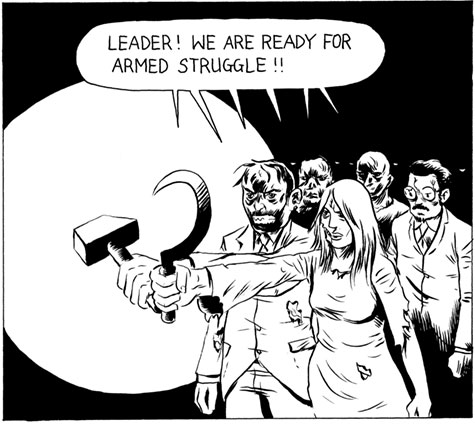