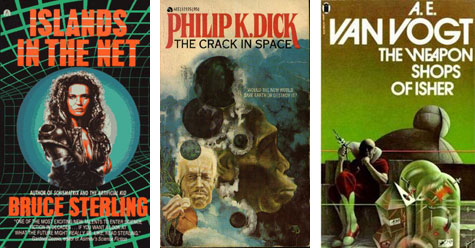 The Red Atlantis by J. Hoberman. It’s been less than 20 years since the collapse of the Soviet Union and it’s cultural output already resembles impenetrable artifacts from an ancient lost civilization. This book is a great archaeology of Soviet culture in general (and Soviet cinema in particular) refracted through the prism of an American film critic.
Schulz & Peanuts by David Michaelis. A towering figure like Charles Schulz will have his life written (and re-written) several times over and I look forward to future efforts. This one was very readable if somewhat controversial. It was especially interesting to get a glimpse of Schulz’s Minneapolis and St. Paul‚Ä¶ even if it meant weeping over so many great things the Twin Cities lost to time and the automobile.
The Weapon Shops of Isher by A.E. Van Vogt. A sci-fi novel by the author the the amazing Slan that takes the right to bear arms to an insane extreme. A kind of libertarian dream/nightmare where individuals are protected by magical all-powerful weapons (which can be used in defense only) against the entire might of an interplanetary empire.
The Crack in Space by Philip K. Dick. This was the secret history of the US 2008 election written by a precog in 1966. An African-American runs for the presidency of the United States and promises to solve the world’s problems by opening up a space-time rift. Sound like Obama?
The Road by Cormac McCarthy. This Road is hard to write about. I think I agree with Steven Shaviro that it “actively repels commentary.” Still, it lingers in my head so it makes the list.
Islands in the Net by Bruce Sterling. This one was a genuine surprise to me. I was aware of Bruce Sterling more as futurist and commentator but I’d never read his science-fiction before. Now I plan to read more. Data havens, ubiquitous networking, single cell protein cheaply mass produced in “vats swarming with bacteria” (aka. scop), nuclear terrorism, mysterious insurgency manuals, etc. The novel felt really relevant to the current world wide situation despite having been published in 1988.
Black Mass: Apocalyptic Religion and the Death of Utopia by John Gray. This is an extremely anti-utopian book. John Gray lays out the case that much of the evil done in the the world is done in the name of the greatest good. The “utopian” projects of the 20th century turned into minor apocalypses in the hands of Hitler, Stalin, Neocons, etc. It’s hard to disagree with him… for the most part. While reading this book one gets the idea that John Gray takes all the utopian sounding rhetoric (for example of Neocons’ project of global capitalist gunboat democracy) at face value, as genuinely utopian, instead of a cynical ideological ploy to mask imperialist projects. In the book he calls for more dystopias (1984 etc.) because utopias have gotten us so consistently in trouble. I would say that it’s precisely utopias that are missing today. We have no problem with imagining apocalyptic futures, but we have lost the ability to imagine positive alternatives to the dystopia of now.
Which is why I enjoyed In Defense of Lost Causes by Slavoj Zizek so much. He takes the exact opposite position to John Gray and argues for the triumphant return of the universal. Actually, I shouldn’t say that I didn’t enjoy Black Mass, I did. But it was a very antagonistic enjoyment.
Next: Blogs