Aaaand here’s another installment of Doodle Dump™. Click on the images to see them bigger.

I went to see Boris, Clouds & Zebulon Pike at the Triple Rock Social Club yesterday. I brought a mini-sketchbook and ended up doing a few drawings (with a Pentel Brush Pen if anyone is wandering). It was fun to do. I might do it again… 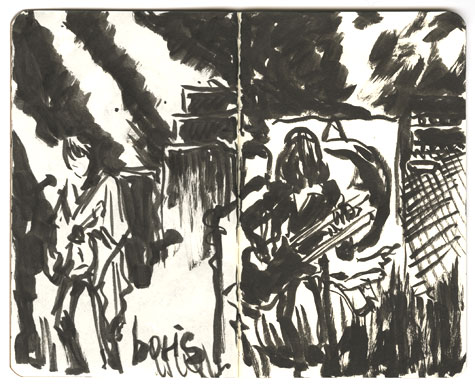 Time for another regular Trans-Atlantis feature: Sketchy Komiks™. Once a week (though not always on the same day) I’ll share some of the comics that keep accumulating in my sketchbooks, but never really see the light of day. Hopefully these will be of interest to somebody out there. Enjoy. 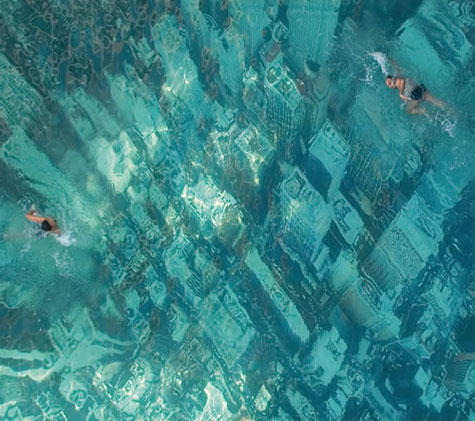 A new theme park is coming soon to Dubai. Named The Ultimate City, its theme will be the the world refracted through the many faceted crystal-like mind of writer J.G. Ballard. It will be distributed throughout the city to make it’s experience as much part of the urban fabric as possible. Some of the attractions will include:

• The Drowned World water park where guests can experience the rising sea levels of global warming as an aesthetic pleasure of the first order.

• As oil rapidly becomes a scarce commodity, Crashland will become the only place to partake in the visceral and intoxicating power of the internal-combustion engine.

• Get closer to the nuclear power of the sun over the ozone free Terminal Beach, or descend into the cool shade of vintage Bikini Atoll concrete nuclear blast bunkers scattered among it’s sandy dunes.

• In a special arrangement with the Burj Dubai, a large section of the world’s tallest skyscraper has been reserved for High Rise: a paint-ball arena where guests struggle for advantage as they try to reach the top of the building.

• Other attractions will include: The Burning World, Concrete Island, and more. 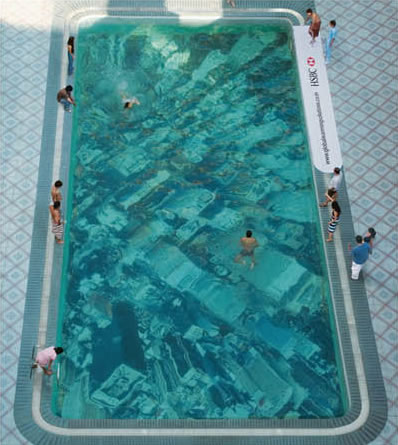 Well… not quite. This is a swimming pool designed by the Mumbai branch Ogilvy & Mather for HSBC Banking group. It is supposed to raise public awareness of the dangers of global warming, but instead they’ve succeeded in creating world’s first (?) Ballardian swimming pool. With all the apocalyptic talk on this blog lately, I couldn’t resist!

I got a few thought-provoking comments to my Post-Apocalyptic Dreams post from a fews days ago. Some thoughts got provoked, hence this follow-up.

All of the comments mentioned Cormac MacCarthy’s The Road. The comments inspired me to read it. But, since I haven’t finished it, I don’t have much to say. I’m about half way through, though I’m not sure if I reached, what Chris called, the self-parodic moment yet. Hopefully I’ll have something more informed to say about it soon. Stay tuned.

Speaking of hope, I wanted to expand a little on Obama and, for lack of a better name, the Utopian Moment. I hope a general outline of what the Utopian Moment might be, will become clear below. I’m working on the final part of my Trans- series of mini-comics (alas, currently out of print, sigh…) and it deals with Utopias (as did parts 1, 2 & 3 in one way or another). These posts are a way to clarify some of the ideas I’m working with.

”I’m afraid when it comes to optimism about imminent real change in Washington, despite my relatively high opinion of Obama as a rare politician with some bona fide intellectual integrity, I’m afraid I’m with Zizek (in the New Yorker profile you link) in comparing the choice between Democrat and Republican to the choice “between Equal and Sweet’n Low, or between Letterman and Leno.”

I’m on board with the Republicrat bit. I’m also pretty cynical about the amount of change that Obama will actually be able to pull off. I’m less interested in Obama’s practical abilities, than in the psychological effect he’s had on the collective unconscious of the planet. I’m interested in what he represents. In that sense, some of the ’empty rhetoric’ criticisms leveled at Obama during the campaign by McCain and Clinton are true, but at the same time that rhetoric matters a great deal. Zizek:

”[…]Obama has already demonstrated an extraordinary ability to change the limits of what one can publicly say. His greatest achievement to date is that he has, in his refined and non-provocative way, introduced into the public speech topics that were once unsayable: the continuing importance of race in politics, the positive role of atheists in public life, the necessity to talk with “enemies” like Iran.”

He may or may not be able to achieve practical changes in the Washington, but the effects of his victory reach further into less tangible mental realms. His victory is an optimism tsunami reconfiguring whole archipelagos of calcified ideologies – not in any specific way, but in a kind of general ‘things are possible’ way.

It’s important to note, that Obama is just a part of the Utopian Moment equation. If the financial crisis hadn’t materialized, if the US hadn’t over-stretched militarily in Iraq and Afghanistan, he probably wouldn’t have been elected. Or, if he had been elected, there wouldn’t have been this kind of urgent impetus for change. The message of hope is meaningless when everything is going well. Obama needed this crisis as much as the crisis now needs him. In other words, he’s the right man for the right time. I don’t want to perpetuate too much the meme of Obama as ‘The One’ but there is some truth to that. The idea of ‘Jesus the Son of God’ was revolutionary for it’s time regardless of who ‘Jesus the man’ actually was. In that sense, the idea of an Obama is more important then Obama the politician.

The current crisis is probably a more important component of the Utopian Moment. The financial meltdown exposed the fictional nature of Capital. Basically, everybody stopped believing that things were worth what the banks said they’re worth. Mental recession indeed! We’re in a rare moment when we’re allowed to realize that all these economic structures and systems surrounding us are invented and made up by people just like us. They’re made of theories, habits, laws and conventional wisdom. In other words, they’re fictional. They’re no longer natural or inevitable. We can make up new ones that might work better. Or at least we can try.

Hope & crisis (utopia & apocalypse… maybe that’s a little too neat…) form a kind of space-time-mind zone – the Utopian Moment – where the horizon of possibilities has expanded exponentially… at least until the currently semi-fluid economic-political relations congeal into another consensus reality. It’s conditions like this that make optimistic Utopian narratives and projects not only possible but realizable.

I don’t want to give the impression that the Utopian Moment will have a positive outcome. I think there are always real dangers of it’s liberating energies being sublimated into negative objectives. This has happened frequently in the past, the French Revolution being one of the most obvious examples. But, even if we can’t seize the moment in the US, the Utopian Moment will have reverberations across the planet.

It’s possible that I’m giving too much credit to Obama and that I’m blowing up another market correction into something bigger than it is. It feels big. Only history will tell… well that depends on who will write it.

Coming soon to a Transatlantis enabled terminal near you:

Introducing a new weekly feature on the Transatlantis: Doodle Dump. Every Sunday I’m going to pull choice scribbles, scrawls and doodles from sketchbooks, paper napkins, random lose sheets of paper, and post the whole lot on this blog. Good drawings will mix with bad ones. Inspired ideas will mix with embarrassing ones. Without further ado:

END_OF_DOCUMENT_TOKEN_TO_BE_REPLACED 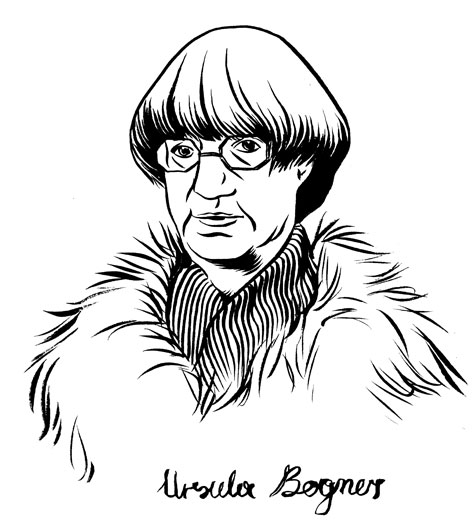 Every now and then I like to imagine a counterfactual pop-music history. In the 50s & 60s, instead of plonking on guitars, aspiring pop musicians stocked up on wires, transistors & vacuum tubes. The basements and garages of their parents suburban homes became audio research laboratories exploring the musical potential of electricity, electro-magnetism and other still undiscovered forces of nature. In that world Ursula Bogner would have been a star. 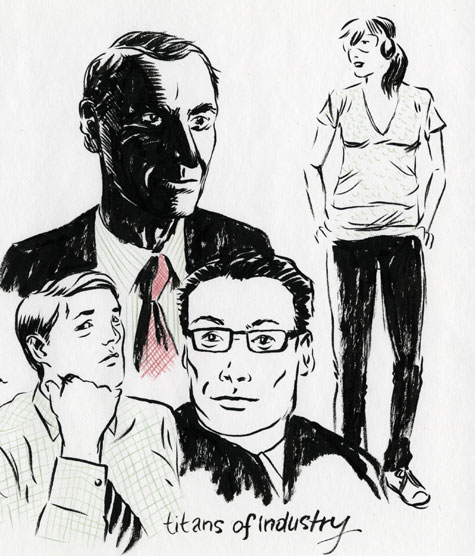 The always interesting Chris Nakashima-Brown at No Fear of the Future posted a link to an interesting Reason article about Science-Fiction as a playground for political ideas. But I found his subsequent discussion more interesting, especially since it touches on something that I’ve been thinking about a lot lately. In the post he says:

“[…] the persistence of post-apocalyptic scenarios (as well as many disaster movies) expresses a latent yearning for the destruction of the state apparatus and the abolition of private property. At a deeper psychological level, […] the idea of roaming a depopulated earth rummaging for useful artifacts articulates the extent of our individual alienation in a thoroughly commodified society.”

No Fear of the Future

I think Chris is correct. I would add that the apocalyptic imagination is symptomatic of an inability to imagine a society different from ours. The Slavoj Zizek quote: “it is much easier for us to imagine the end of the world than a small change in the political system,” is particularly apt. The future event horizon is so saturated by commodities, markets and debt (think about it, every 30 year mortgage is a financial spore which ensures that capitalism keeps blooming in our future) that it becomes increasingly more difficult to imagine a future that is different from the present. It becomes easy to think that some kind of Apocalyptic Event (AE) maybe our only way out.

But, much of this is tied to the continued survival of the capitalist system. Recent events, such as the financial crisis, put that survival in some doubt (I’m not counting out capitalism just yet though). Add to that the boundless optimism sparked by Obama’s victory and all of a sudden you have a license to imagine a different future. I wonder what kind of Science-Fictions the current situation will spawn? Will the apocalyptic imagination be as prevalent? After all, an Apocalyptic Event (real or imagined) is often prerequisite for the dream of Utopia.

I was sad to see the Drama Magazine fold up a couple of years back. I never really got around to writing an obituary… and it looks like I may not have to. Sort of.
This has probably been online for some time. Still, it’s pretty cool: the entire run of the magazine is now available as free PDFs! It was a cool mag, fantastically designed (each issue better than the previous) with a great 2-color comics section. I had the privilege to contribute to the last 4 issues along with such great cartoonists as Vanessa Davis, Zak Sally, Matthew Thurber, Dash Shaw and many others. RIP The Drama. Long live the Drama. Nothing stays dead for long. All that is solid melts into air. Internet immortality and all that…

Still, I’m going to treasure my hard copies that much more. Thanks to Joel & Travis for asking me to contribute and for being such gracious editors. 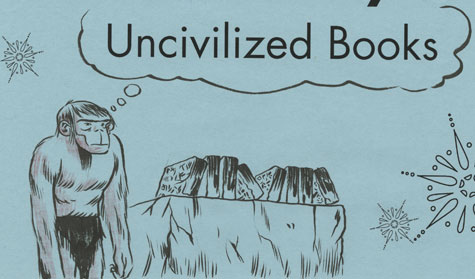 I spent Saturday and Sunday tabling at the 7th Annual Minnesota Book Arts Fest at the Minnesota Center for the Book Art. The event is scheduled just in time for the great month-long consumer frenzy known as Holiday Shopping. Most people come looking for handmade gifts, cards, envelopes, prints and calendars. They found plenty to choose from. I shared the table with cartoonist Will Dinski. We valiantly attempted to flog paeans to smoking and voodoo economics fantasies onto the unsuspecting public. Together with Lacey Prpic Hedtke, Sarah Morean, and The Good Minnesotan we formed a Zine-to-Comics-multi-table-continuous-almost-commerce-free-semi-autonomous Zone. At some point Matt Peiken came by and video taped some of the proceedings. He posted some of the footage online. I made the cut despite being nearly incoherent.